STORMONT! STOP violating our Human rights! Face masks should be a personal choice, NOT MANDATORY!!! 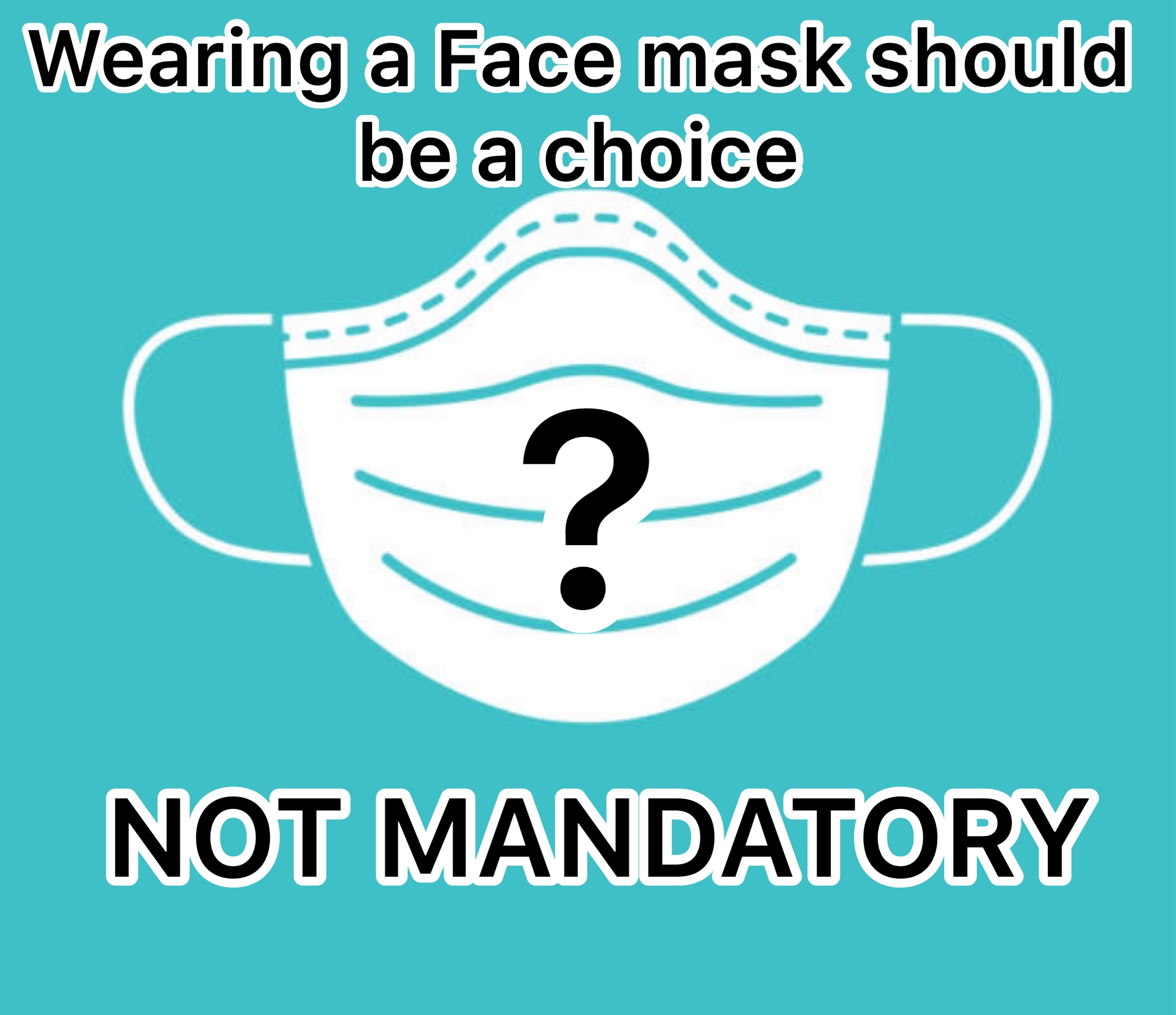 Further to announcements that face masks will be mandatory in Northern Ireland, The signatories on this petition are calling for an end to the dictatorship of the Stormont executive and public health officials who are infringing our inalienable human rights as set out in the Human rights act 1998.

The Northern Ireland Act 1998 sets out the legislative competence of the Northern Ireland Assembly and states that the Assembly may not legislate in a manner that conflicts with the European convention on Human rights. The Act places a DUTY on public bodies not to act in contravention of the ECHR.

The mandating of face masks on public transport, in shops and within clinical settings is as we see it; in direct violation of our human rights under the following articles:

Article 2 which states that everyones right to life shall be protected by law and no-one shall be deprived of this life. Forcing people to wear masks impedes the natural way to breathe oxygen and expel harmful pathogens effectively. It is only logical that covering the airways restricts the natural intake of oxygen to the wearer. Prolonged use of face masks has been shown to be harmful to health in numerous scientific studies and an overwhelming opinion within the scientific and medical communities is that the use of non-medical face masks in healthy people isn’t justified and increases the risk of serious infection to the wearer. Many Doctors worldwide are speaking out about the health risks posed. Face masks offer a false sense of security to the wearer and cause psychological distress for many. The government and public health officials mandating face masks must be held liable in a court of law, for any person who suffers ill health (physical or mental), from such enforcements in shops, on public transport and within clinical settings!
It is only right that liability is accepted for unlawful mandates by government and those enforcing such mandates.
Many healthy people report feeling physically and mentally uncomfortable while wearing the masks and feeling that their breathing is restricted. There are also reports of people admitted to hospital due to illness caused by mask wearing. Mandating face masks in Shops and on public transport (both of which people use on a day to day basis), ensures prolonged use and therefore increases health risks to the wearer. It is a danger to our lives.

Article 3 states No-one shall be subjected to torture or to inhuman or degrading treatment or punishment. Forcing members of the general public to wear masks against their will is inhuman, degrading and amounts to psychological and physical torture for many. Telling people they cannot avail of public transport or enter a shop to buy basic necessities unless they are wearing a mask, is degrading and demeaning to say the least. This is already happening with mandatory mask wearing in shops and public transport and hospitals. People are being subjected to unfair, degrading treatment.

Article 9 everyone has a right to freedom of thought and given that there is NO PROVEN scientific basis that mask wearing by the general public prevents the spread of viral infections, a person should be able to express their freedom of thought and choose if they think it’s the right decision for them to wear a face mask.

Article 10 of the human rights act also states that everyone has the right to freedom of expression. This right shall include freedom to hold opinions and to receive and impart information and ideas without interference by public authority and regardless of frontiers. By mandating face masks the government is taking away our freedom of expression given that there is no proven scientific basis for the wearing of non medical face masks. People have a right to hold and express their opinions if they choose not to wear a face mask.

Article 14 of the act states - The enjoyment of the rights and freedoms set forth in this Convention shall be secured without discrimination on any ground such as sex, race, colour, language, religion, political or other opinion, national or social origin, association with a national minority, property, birth or other status. Given that the mandating of face masks on public transport and in Shops is not based on any proven Science and that there is conflicting opinions within the medical and scientific community regarding the effectiveness and safety of such mandates; the government and any other public health body is therefore prohibited under this and previous articles set out, from mandating face masks for the general public and preventing people from the freedom to choose.

People have a right to their freedom of choice in matters of public debate. Non-medical Mask wearing is a matter of public debate. IT'S NOT SUPPORTED BY THE MAJORITY OF MAJOR MEDICAL JOURNALS AND STUDIES DUE TO HEALTH RISKS AND WHERE THERE ARE HEALTH RISKS, THERE SHOULD BE CHOICE! They should NOT therefore be mandated by government; or any other public health body and doing so is an infringement on our basic human rights and civil liberties. People should be allowed to choose to follow the advice of those within the medical profession and scientific community( OF WHICH, THERE ARE MANY) who advise against face mask use in the general public, without having to face penalties or discrimination for doing so!

We are supposed to be living in a democratic society in Northern Ireland but with the response of government to the COVID-19 virus (which has a survival rate of over 99 percent in the majority of the population), has proven that the government has overstepped its power. Enough is enough! We wont be muzzled like animals!
The mortality rate is continuing to decline and the survival rates in this Country are extremely high.

The same public health officials now endorsing mandatory masks just weeks ago and during the "peak" of the "pandemic", repeatedly told us that the public don't need to be wearing face masks as did the Stormont executive! It makes no sense to mandate masks 5 months into a "pandemic".

Mr Swann himself said and I quote "One thing that would concern us is that face coverings actually lead to a false sense of security and we could see other measures with regards to good hand hygiene, social distancing start to become less prevalent." There is still no conclusive scientific evidence to support their change in opinion. Their opinions must not override individual choice on such a controversial matter.

There are now investigations in England into how COVID-19 deaths are fraudulently being reported by public health agencies, proving that the mortality rate is much lower than we're told. Thousands of deaths are to be removed from the Covid count. The criteria for Covid reported deaths in this Country is also very broad and open to manipulation. It is becoming clear that the government has an agenda which has nothing to do with the health and safety of the public and more about controlling the free will of its citizens. The Covid-19 official data cannot be trusted as admitted by government officials!

Communist countries such as China where face mask wearing is common practice before the Covid-19 outbreak: are proof that face masks do nothing to prevent the spread of the coronavirus! Otherwise there would have never been an outbreak or lockdowns. The government has caused more harm and suffering to both its citizens and the economy with it’s response to the coronavirus over the last 5 months than the coronavirus itself has. COVID-19 cases declined at the same rate in countries whose governments didn’t impose such extreme measures on its citizens. Sweden, Denmark and France will not mandate masks in their countries because top virologists say there's no proof they're effective. The people of Northern Ireland have been complacent for long enough despite the failed doom and gloom predictions of public health officials and mainstream media. We are calling on the Stormont executive and public health officials to STOP INFRINGING ON OUR INALIENABLE HUMAN RIGHTS and to give people a CHOICE on whether or not they want to wear a face mask. Enforced Mask wearing is symbolic of SLAVERY and has NO PLACE IN A DEMOCRATIC SOCIETY! Where will the dictatorship end? Next, we'll be told we cannot enter shops or use public transport without having had a rushed unsafe covid vaccine.

People who don't wear a face mask should not be shamed on media by public health officials/politicians saying that it shows “respect” when you wear a mask. A statement like that is indirect discrimination against people with physical and mental disabilities who cannot wear a mask. It has incited bullying and abuse of individuals who choose to follow the evidence against face mask use and it is disgraceful for any health official or politician to shame anyone for not wearing a mask. They fail to recognise those who cannot wear masks in their virtue signalling campaigns.

What about those who rely on lip reading to communicate? What about the psychological health of victims of attacks by masked individuals who will be forced to be reminded of that in their everyday life, just from walking into a Shop? Can these public health officials provide any unbiased solid scientific evidence to the public proving that non medical mask wearing in the community prevents the spread of Coronavirus or any other Virus? Are we to believe the 15 years of Science reviews for planning in pandemic control which says there's no conclusive evidence to support it, has suddenly changed and where is the proof of such a drastic change? The public deserve to see such proof! Under the freedoms of information act we demand to see the "compelling evidence" the executive and Mr Swann claim to be privy to!!!! Or are we to just "mask up" and shut up?!!

"The question we must ask ourselves is this: If our government can mandate such a personal and disruptive lifestyle change to our bodies with assertions that contradict their own long-standing evidence from just a few weeks ago and with so many unanswered questions, what else can they do to us without presenting evidence to the public? It appears that "my body, my choice" only applies when aborting babies. We deserve answers! We are citizens, not subjects! Just because this Virus came from China doesn't mean the politicians can use it as a pretext to turn us into China."

LOCAL BUSINESSES WILL ALSO SUFFER when face masks are mandatory in shops as many people will opt to shop online rather than be subjected to face masks and abuse from members of the public while they shop. Shoplifters will also be harder to identify and apprehend. Crime rates could easily soar. This is a call to the Stormont executive to DISREGARD the EXTREME RECOMMENDATIONS of Mr Swann and STOP the mandation of face masks in Northern Ireland. LET PEOPLE CHOOSE FOR THEMSELVES!!!!!!!!!! DON'T IMPOSE the opinions of health officials on to the public! ENOUGH IS ENOUGH! Be guided by the Science, as has been your position the last few months and the Science still says that face masks in the healthy does not prevent the spread of infection!

WE KNOW OUR INALIENABLE HUMAN RIGHTS AND THE STORMONT EXECUTIVE WILL BE HELD ACCOUNTABLE FOR THE CONSEQUENCES OF FORCED PUBLIC MASK WEARING! REPEAL THE MASK MANDATES! PROVE TO THE PUBLIC THAT STORMONT CARES ABOUT THE FREE WILL OF INDIVIDUALS!

By signing, I authorize K.C to hand over my signature to those who have power on this issue.