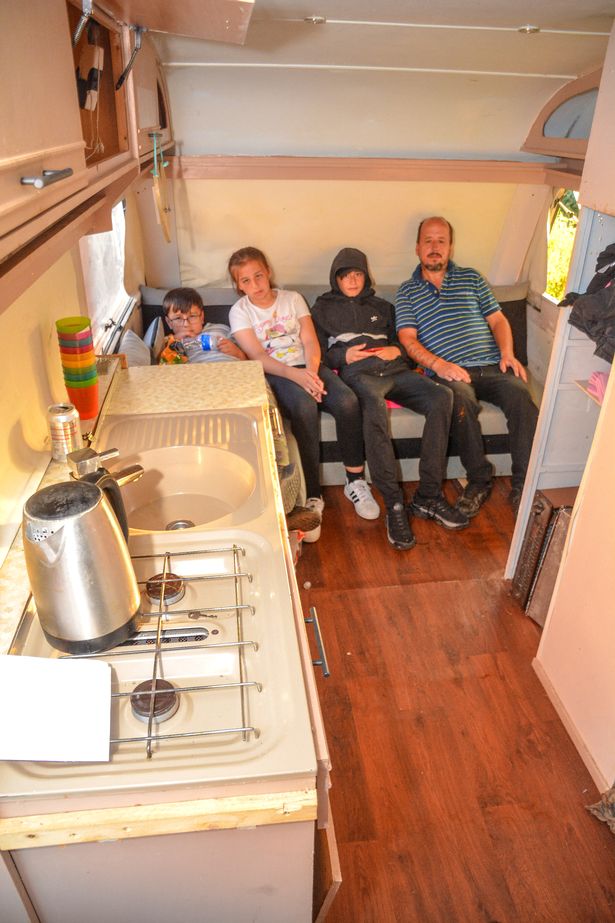 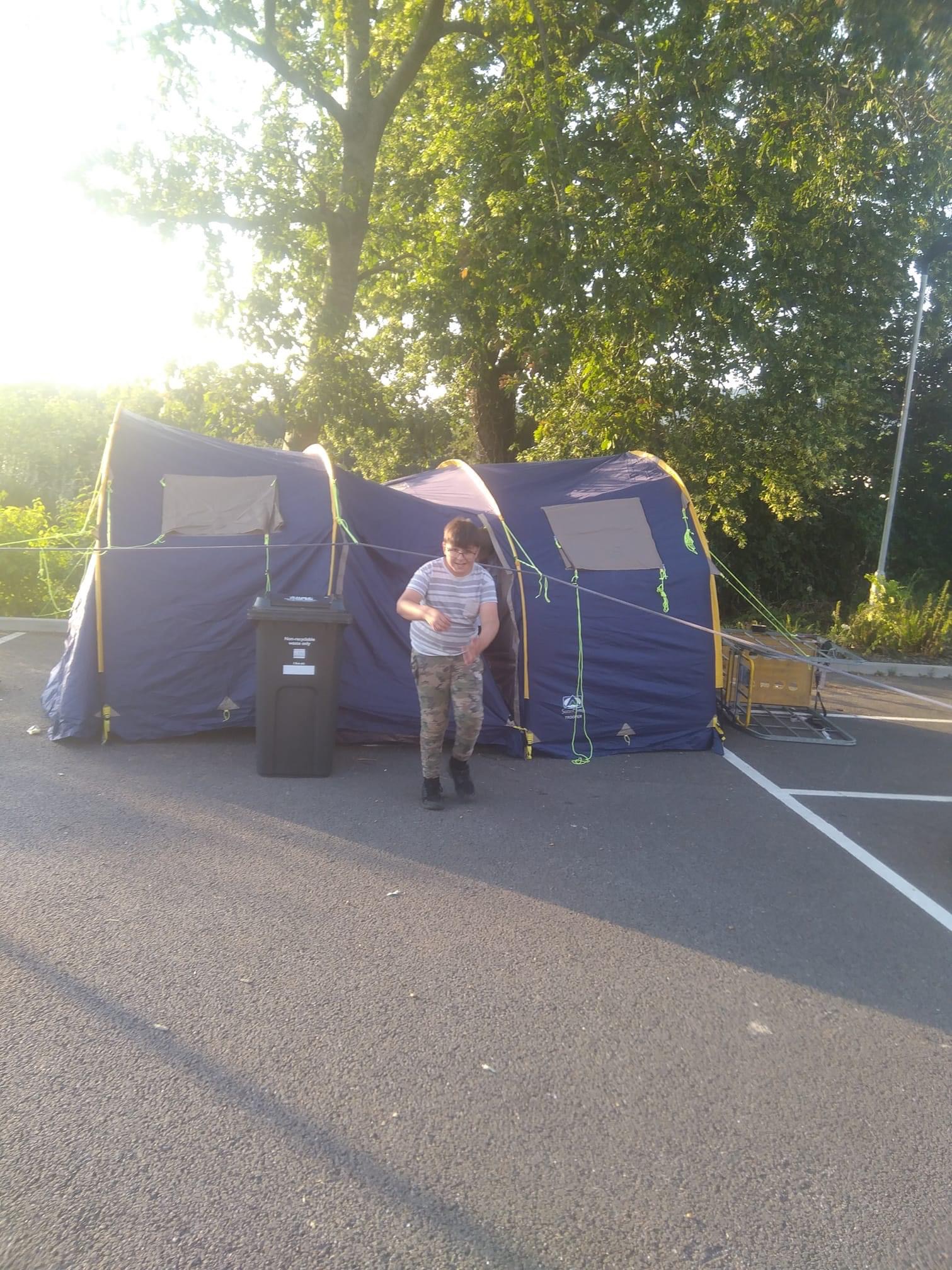 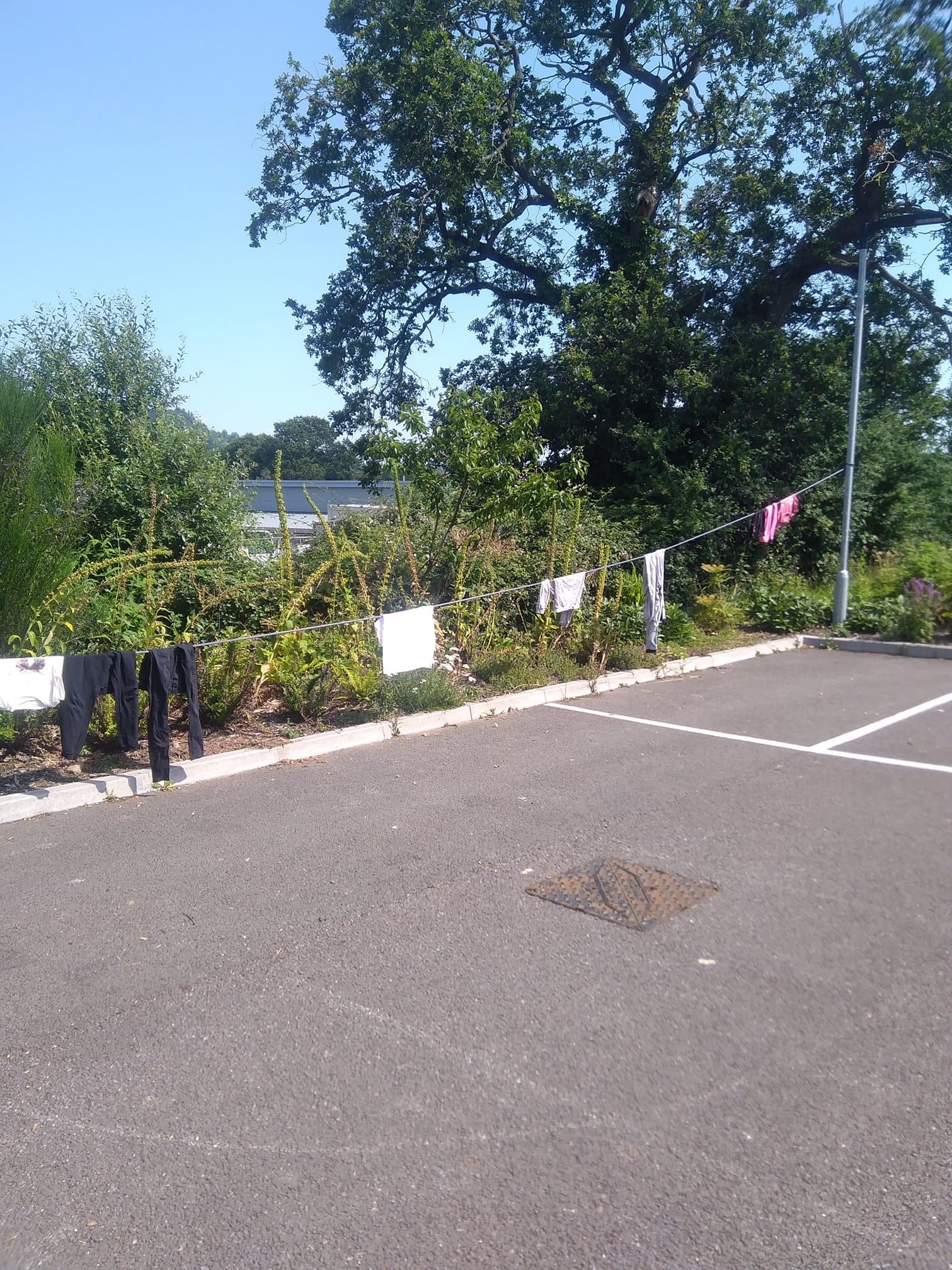 Paul Lee, aged 41, bought a caravan from Taunton on Sunday, July 18 and moved him and his three teenage children and chihuahua into the car park of East Devon District Council. His other two children are living temporarily at his father’s house in Lyme Regis.

Paul said: “I was renting a house in Musbury near Axminster, then the landlord wanted to sell the house. He went to court and was successful in getting an eviction notice, and we were given our first eviction notice last year.
“Due to Covid-19 they government prevented us being evicted, but then, as of Monday, July 19, we finally had to leave, and that’s when we moved to East Devon’s car park.”

Paul, a labourer working 16-hours a week, while single-handedly looking after his five children after separating from his ex-wife, turned to East Devon Council for help several months ago, when he knew he was going to be left homeless.

I pleaded with East Devon Council for help, but they told me I had intentionally been made homeless. Even though the landlord wanted us out to sell his seven-bedroom farmhouse, East Devon say I owed rent, even though I was paying cash each month.

So, the landlord has told East Devon I wasn’t paying my rent, therefore, they won’t help me.”
Due to their anger, Paul and children, Alfie, 16, Archie, 15, Thomas, 13, Tilly, 12, Oscar, 11, came up with a plan to show councillors and staff how upset they were with the situation.
“On the Sunday before we were evicted, I got a friend from Taunton to tow the caravan down to Honiton,” he said. “The kids have gone through enough, so we got out of the house before the bailiff’s could come and force us to leave.”

Tilly, a pupil at Woodroffe Secondary School, who has ambitious to one day be a teacher, added: “It’s very hot, it’s hard to live in here with my brothers.
“You have to walk to find water and electricity, and I have to use our car to charge up my phone.
“My headteacher found out and asked about food vouchers and such and was worried about our accommodation.”

Paul added: “It’s not fair to my kids the way East Devon District Council are treating us.
“Since we have been in the car park living, they haven’t let us use their toilets, electric, and only two members of staff came out to see us.
“They weren’t very nice, and said if I don’t move this caravan by Thursday morning they will forcibly remove us.
“I just want a home for my kids, it’s not rocket science, we’ve been told homes are available for us, we just want a roof over our head.”
Paul has made a sign on the side of his caravan which states: “East Devon Council will not help rehouse a man with five kids. My name is Paul John Lee (Baz). [His number] So, this is where we are going to be living.”
All Paul now hopes for is to be given a house.

Alfie added: “You can’t even go to the toilet here, you can’t have a shower.
“I go to work at a garage, and I’ve been washing cars as a side business. When I get back from work, changing an engine, and I can’t have a shower until I go to my nan’s in Lyme Regis.
“It’s a ballache having to go down to my nan’s and rely on my dad us up. It’s not great having to go around hers all the time, but she is a very good cook.”
Paul added: “I’m aware that every single council has got to keep ten properties available for emergency situations for people, and this is definitely what I would consider an emergency.
“I intend to stay put, despite East Devon’s threats of moving us on, until we get help.”

since they have now been evicted from their tent, so when the children finish school today they have nowhere to go home to! This is disgusting when there are clearly houses available for them! East Devon council you should be ashamed!!!

By signing, I authorize Paul lee to hand over the information I provide on this form to those who have power on this issue.