If you are concerned about the application filed with the city of Salem to rezone property located at 4120 Kurth St S, you are urged to sign this petition. While development and use of the property is generally a positive for the neighborhood, the proposal to rezone the property to RM 2, which will allow up to 42 multifamily units, is not acceptable.

For the reasons above and any included in the optional comments, I oppose the application to rezone the site at 4120 Kurth St S.

More information about the proposed development plan taken from minutes of the Sunnyslope Neighborhood Association's May 21, 2020 meeting:

The developer proposes a 36-unit apartment complex housed in four buildings with three floors each on the 1.5 acre site. The planned development will require a zone change from singl-family residential to RM 2, which would allow for up to 48 units. With the existing utilities in place, the plan is to keep as many trees as possible. Buildings will be set back 30 feet from neighboring property lines The developer will be required to make 1⁄2 street improvements along the property lines on Kurth and Browning which will include sidewalks. They will also be required to construct a 90-foot turn around on their property for Mesa Street. There will be entrances off Browning and Kurth with two parking spaces per unit. These will be market rate units. According to the architect, the units will not be "affordable" housing units, but will be market rate units. 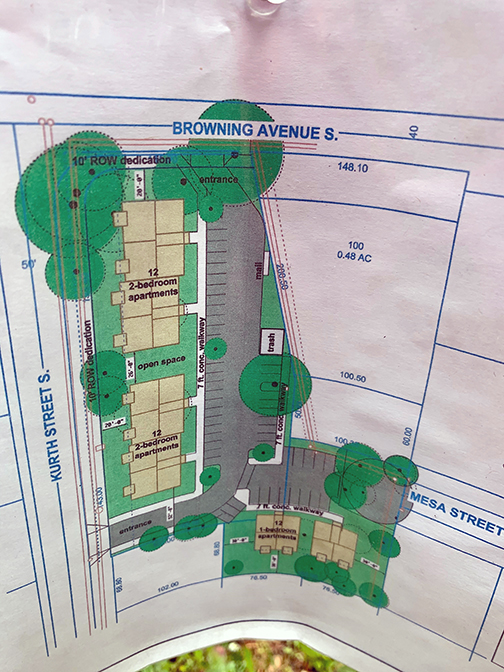 Kevin Willingham, Sunnyslope Resident    Contact the author of the petition

By signing, I authorize Kevin Willingham, Sunnyslope Resident to hand over my signature to those who have power on this issue.