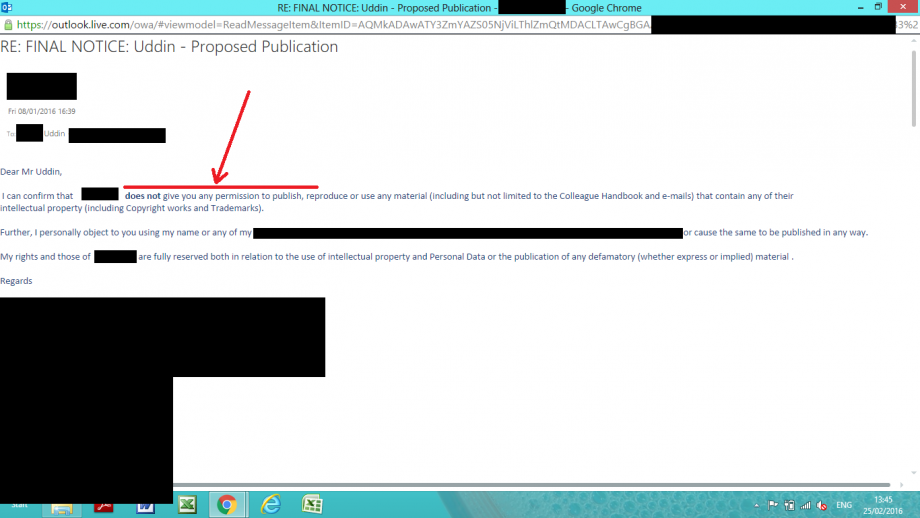 Click here to see the image larger (opens in a new window). I want to publish material in the interests of the British public that supports my allegations of wrongdoings of a certain major company in the UK. My allegations include the company destroying evidence, not addressing issues at all (yet claiming issues have been addressed) and having an openly declared liar to advise employees.

Click here to see the image larger (opens in a new window).

I could not bring a case of breach of contract to court as I did not suffer financial damages. Also, there is a method to raise awareness of a company's wrongdoing (called whistleblowing) in the interest of the British public. However, this method only deals with certain issues and the allegations I have raised are not dealt with by this method. I can still raise any other issue as long as it is in the interest of the public. More information (with images of emails) can be found here: http://informationpi.blogspot.co.uk/2016/02/information.html

ALL SIGNATORIES TO THIS PETITION WILL BE INFORMED OF THE NAME OF THE COMPANY THAT THIS PETITION REFERS TO AND PROVIDED WITH FURTHER INFORMATION. A CONFIRMATION LINK WILL BE SENT TO YOU ONCE YOU SIGN THIS PETITION TO CONFIRM YOUR EMAIL ADDRESS. PLEASE REMEMBER TO CHECK YOUR JUNK MAIL BOX AS WELL.

The signatories to this petition agree to all the following:

1) That it is in the best interests of the British public to know all the information Mr Uddin has either already published or intends to provide to signatories.

2) That it is in the best interests of the British public to know the name of the supermarket referred to in this petition.

ALL SIGNATORIES ARE ADVISED NOT TO CONTACT THE SUPERMARKET AS THIS MAY BE CONSIDERED HARASSMENT. THE AUTHOR OF THIS PETITION TAKES NO RESPONSIBILITY WHATSOEVER SHOULD THE SIGNATORY DECIDE TO CONTACT THE SUPERMARKET.
4) That the signatory to this petition will not tell anyone else the name of the supermarket referred to in this petition and that if the signatory does tell anyone its name then the signatory will be fully responsible if a defamatory statement has been passed on by the signatory's action.
ALL SIGNATORIES ARE ADVISED NOT TO TELL ANYONE THE NAME OF THE SUPERMARKET. SIGNATORIES MAY HOWEVER SHARE THIS PETITION PAGE WITH OTHERS SO THAT THEY CAN SIGN THIS PETITION AND BE INFORMED OF THE NAME THEMSELVES.
ALL FIELDS IN THE FORM BELOW ARE REQUIRED TO BE FILLED IN. IF THERE IS ANYTHING IN THE FORM WHICH YOU DO NOT WANT TO BE SHOWN IN PUBLIC, PLEASE SELECT 'NO' TO THE QUESTION 'Show your signature in public?'
THANK YOU