Lycoming County Commissioners Tony Mussare and Scott Metzger have both asked the James V. Brown Library to remove LGBTQA+ supportive books from the display in the children's section. They have been elected to delegate where our tax dollars go and have chosen to use that responsibility to dictate the actions of the public library to fit their own personal politics. When your opinions start to influence your decision making ability, you are no longer competent to complete the duties of a public servant. Scott's Facebook post (attached below) shows his attempt to strongarm the library to bow to his will by pointing out that he has the ability to decide where our tax dollars go. This cannot stand and our public education and information systems needs to be defended. Tony expresses concerns that these books will confuse our "already confused" children. These words and actions invalidate the LGBTQA+ community and will only lead to children feeling more ashamed and ostracized. We must protect these already at-risk youth and let them know that they can be who they are without fear of being looked down on by the very people we've elected to serve them.

Please sign this petition if you feel like Commisioners Mussare and Metzger are no longer fit to represent our community in a publicly elected capacity. 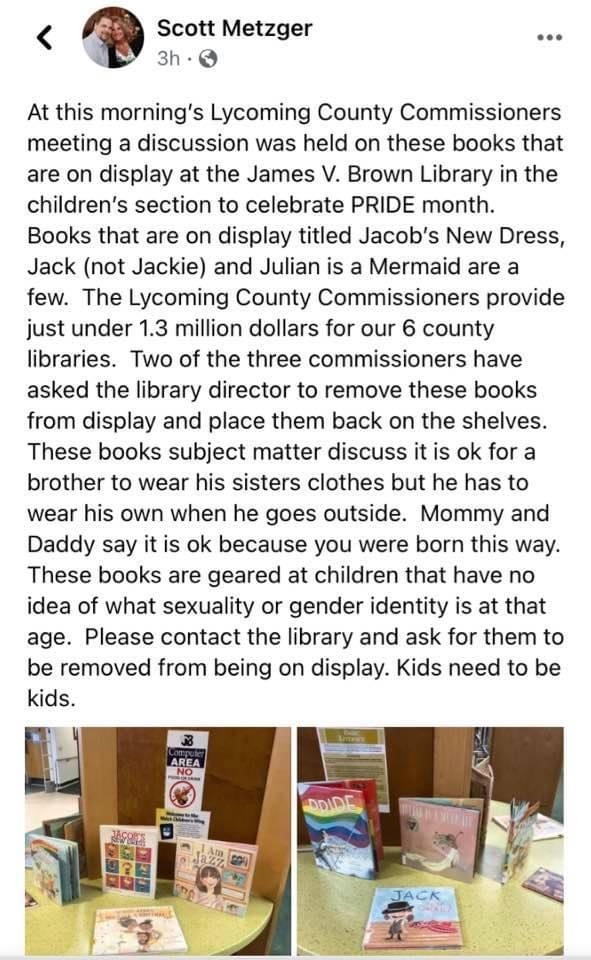 By signing, I authorize Lycoming County to hand over the information I provide on this form to those who have power on this issue.