Declare the WEF and all Associates an International Terrorist Organization 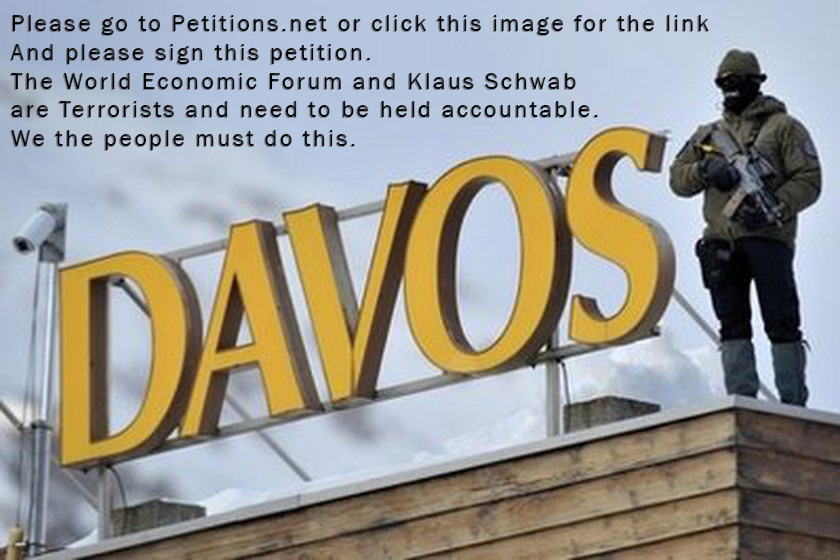 To whom It may concern.

The WEF (World Economic Forum) consists of a Private Organization that not only engages Head of States and CEO's of top tier business and in general leaders of our society globally but it has programs on which they "groom" the next generation of bright young individuals into "Global Leaders of the Future".
It is a fact that many of the policies currently adopted by Nation States such as the "Build back better" and Vaccine Mandates were developed by this Organization.
Others such as the "Digital ID" are about to be Implemented.

In their own words:
"The World Economic Forum is an independent international organization committed to improving the state of the world by engaging business, political, academic and other leaders of society to shape global, regional and industry agendas."

Now the Associates of the WEF have assumed through this process and others we do not know of considerable power over Associated Nation states.
Associated Members like Canadian Justin Trudeau & Olaf Stolz are elected Members of Parliament and Head of States of Canada and Germany respectively.
They and many other Members are on the forefront of implementing policies that are infringing not only on basic Human Rights such as Freedom of speech but would elevate their own powers to levels which can only be described as dictatorial.
Moreso they are working to restructure the basic model of their own National Societies in which the core functionality of Democracy are upheld into an Authoritarian Society.
This is at its core an attack on National Sovereignty.

National Sovereignty :
The supreme, absolute, and uncontrollable power by which an independent state is governed and from which all specific political powers are derived; the intentional independence of a state, combined with the right and power of regulating its internal affairs without foreign interference.

The World Economic Forum as an Independent Organization has by their actions and that of its Associates shown to undermine and work against this basic principles of society.
More they have assumed a position of power outside the chain of command to undermine the basic principles of National Sovereignty and Democracy.
This is an act of Terrorism against all Nation States.

Financial terrorism (also known as economic terrorism) most commonly refers to the secret manipulation of a nation's economy by state or non-state actors. However, economic terrorism may also be unconcealed, arguably in the name of economic sanctions. Economic terrorism targets civilians of nations or groups in the pursuit of political aims.

The World Economic Forum and its offspring the World Government Summit has a stated interest in and a long standing tradition of manipulating economics and politics to undermine Nation State values and democratic principles.

"We believe a World Government is the only solution to create order on this planet, better global governance by the world leaders to create a better planet for all of us."

Now the assumption of power by the WEF reinstates  their aim to be a "leader of Nations above Nations".
Their lack of transparency however and the secrecy around them shows their true ambition.
They do not want to be held accountable for their actions.
And they are unwilling to enact into a democratic process.
They do not present Ideas.
They do however install  into their members the believe that they have the right to assume totalitarian powers without debate or due course.
This is an act of Terrorism.
This is the undermining of National Sovereignty and Democracy itself.
This is an act of war by a private organization to control every Nation everywhere.
It is not just an act of war but also an act of Terrorism by this International Terrorist Organization to force the citizens everywhere into accepting them and their Associates as the supreme power over all.
It can safely be assumed that the great Covid Hoax was created by the WEF as all their actions especially the ones of Klaus Schwab their self appointed Leader fit into the timeline and progression of events that it reveals a pre meditated plan executed by military precision.
His book: COVID-19: The Great Reset, was published too fast and therefore reveals insider knowledge of upcoming events that under any circumstance could not be known otherwise at the time.
It is safe to assume that the WEF International Terror Organization created this together with their Associates.

Furthermore we are facing now a global crash of the economy which can be traced back to the WEF.
It consist of the crime of defrauding everyone of the value of their work and money.
It is an act of Terrorism.
It is an attempt to seize power by this International Terrorist Organization

You will find that by every definition true to the word the World Economic Forum their Associates and their leader Klaus Schwab are a political motivated private International Terrorist Organization who operate clandestine and infiltrated every position of power everywhere to assume power over all.
Their aim is to use economic Terror to force all subjects into surrender of Nation States Democratic Values & Human Rights.

Addendum:
The recent steps taken by the Canadian and US Government respectively to disarm their people is just one another step by this Terrorist Organization to disarm the population they are about to attack.
Justin Trudeau and Joe Biden both are under control of this Terrorist Organization as are Ursula von der Leyen Olaf Scholz Emmanuel Macron Boris Johnson and so many more.
They are preparing for a Global takeover and for that reason want to disarm their people.
And all leads back to the WEF who coordinate and control this act of Terrorism.
By declaring them openly for what they are we lay the legal Groundwork.

The recent Food shortages are also a problem of their creation.
It is the same makers and another act of Terrorism.
Help us fight them.

Sudden death syndrome (SDS) is a loosely defined umbrella term for a series of cardiac syndromes that cause sudden cardiac arrest and possibly death.
Some of these syndromes are the result of structural problems in the heart. Others may be the result of irregularities within the electrical channels. All may cause unexpected and abrupt cardiac arrest, even in people who are otherwise healthy. Some people die as a result of it.

Sudden Death Syndrome is the result of the Vaxxination Shots because this is the common denominator.
The only thing all of those with this Sudden Death Syndrome have in common is that they had this "Vaxxination" Shots.
If this is the common denominator it is the reason.
The Mainstream Media wants to hide that fact but they can't.
They are as much Terrorists of our everyday life as the WEF responsible for this act of Terrorism.
We must stop this and arrest all them who do this to the human race.

The following must be fulfilled

2) The arrest of all members of the WEF and associates currently holding a position of power anywhere everywhere.

3) The public availability for everyone of all documentation of the WEF and associates.

4) A freeze of assets of the WEF its members and its associated companies and their members.

5) An open ousting of all associated with the WEF from power so they shall never be able to adopt any position of power anywhere.

6) All Information about this case must be made publicly available openly to all citizens and all people and all members of this International Terrorist Organization must be held in captivity until this case is solved in the interest of all citizens.

By signing, I authorize Fritz Freud to hand over the information I provide on this form to those who have power on this issue.