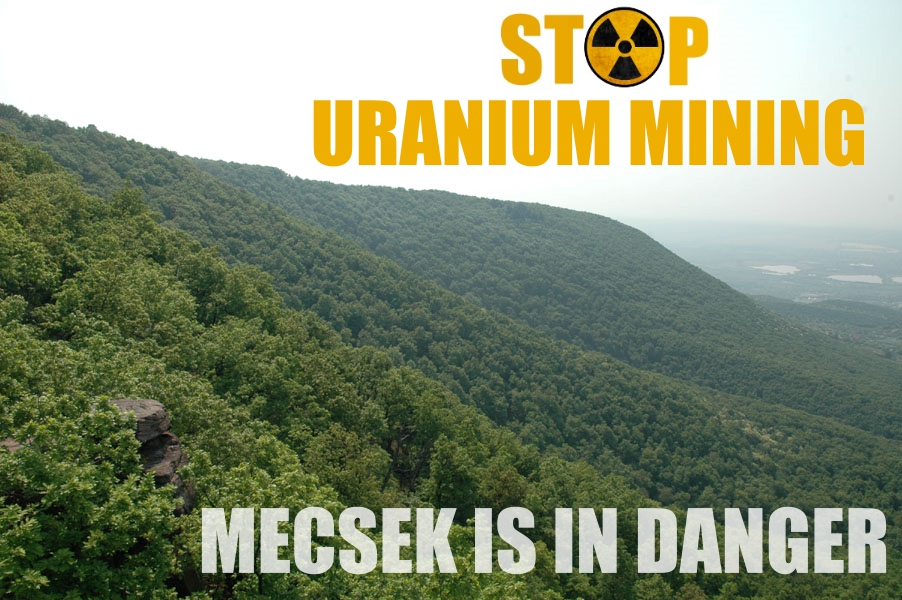 In the heart of the Mecsek hills a company with a mysterious background plans to open a uranium mine: formerly called Wildhorse, now it’s under the name of Hungarian Uranium Resources Ltd.

Mecsek is an individual bird protection area, its unique plant community, wild life and geological forms are our protected treasures. Many of the hundreds of native species who live here reside only here in the Carpathian Basin.

Both protected and highly-protected animals live here such as bee-eaters, great nightingales, swift lizards, praying mantises and dovetail butterflies. All endemic species of amphibians, reptiles and birds are protected.

The Western-Mecsek Landscape Protection Area has been declared protected precisely in order to conserve these treasures.  According to the law, industrial and mining activities are prohibited in this area.

SAFE THE MECSEK HILLS FROM THE URANIUM MINE! Only together can we stop the destruction!

The competent environmental authority, the Government Office of Baranya County District Office of Pécs, has rejected the environmental permit of the investment at first instance. The authority justified the decision that according to the Nature Conservation Act it is prohibited to open a mine in a landscape protection area.

The investor company appealed against the official decision and the Pest County Government Office also terminated the procedure on the second instance. Yet now for some mysterious reason a public hearing was planned for 5 December, which got postponed just 2 days before.  The plans have not changed: the company still wants to open the uranium mine at the area of the Mecsek landscape protection area. We have to act now!

Health of the local people can be in danger!

The uranium mine could pollute the water, the air and the soil. The dust generated by the operation of the mine could carry radioactivity. Radon gas which is generated during the processing of the uranium can increase the risk of lung cancer. A uranium mine could also raise the risk of other type of cancers and cytogenetic damages. An encrypted report by the Hungarian Academy of Sciences revealed that a substantial part of the studied 3500 uranium miners in Pécs did not even reach retirement age.  Peculiarities of the former miners include lung cancer and other tumorous morbidities, silicosis and other health problems.  Based on health examinations the risk of birth defects and childhood leukemia could increase even among the children of the miners.

Drinking water sources can be in danger!

The locals don’t support it!

The planned investment divides the locals in Pécs and the surrounding municipalities. A 2018 survey by Energiaklub revealed that only 4 out of 10 local support the re-opening of the uranium mine at the border of Pécs.  64% of the respondents think that the opening would cause destruction of the nature of the Mecsek hills. 6 out of 10 surveyed believe that their house will be devalued because of the uranium mine and that the inhaled dust and radon gas could cause radiation in their bodies. Half of the questioned population agrees with the statement that due to possible radioactive leaking the drinking water could be contaminated.

Property can be devalued!

In May 2018 Energiaklub conducted a survey in Pécs and its surroundings in order to find out what the locals think about planned nuclear investments (Uranium mine in Mecsek and a radioactive waste disposal in the area of Boda). The answers showed that significant parts of the local people are afraid that with the planned uranium mine opening will devalue their properties.

It can be an economic dead end!

Uranium mining at Mecsek would be uneconomical it could be viable only with national and municipal support namely from our tax payments. The uranium content of the Mecsek ore is only 0,12% which can only be produced with great losses.   In international level 0,3% uranium content is classified as appropriate for mining.

Nope. The uranium from Mecsek would not be used in Hungary, rather the plan is that it would be enriched in Mayak, Russia. They would also produce nuclear fuel from it there. Minced and enriched uranium can only be processed in a few countries, for example at the notorious Russian facility. Paks II, the planned Hungarian nuclear power plant, is also going to be built by the Russians with Russian loans and by depleting our country with its dependence for decades. If they build it, they won’t ship the uranium from Mecsek to Paks but from the Russian fuel plant.

It is surrounded by mystery

The Hungarian Uranium Resources Ltd.  (formerly Wildhorse) has a turbulent background: they do not have a website, and there is not even publicly available information on the investment (apart from the environmental impact assessment rejected by the authority). There are no public studies on the thrift of the project or its job-creating effects, only empty promises in the statements of the investors.

This is not the future!

The legacy of the former uranium mining is still a burden in this area. The 30 billion forint cost of the mining reclamation and the "death money" paid to uranium miners were not enough to eliminate environmental and health-destroying effects. The mining traces are still visible and the resources of Mecsek have only partially reversed. Some of the former miners died young. Although some people think nostalgically about mining life, in the 21st century it is unacceptable that ensuring a decent living must cause such harm to health and the environment.

It does not provide real job opportunities!

According to the plan of the investor the planned uranium mine would only provide jobs for the fragmentation of the former mining production, approx. for 540 people.  In green economy (for example in the renewable energy sector) there are far more opportunities as evidenced by a number of good examples. In addition uranium mining could frighten away other industries and could push back the tourism in Pécs and the surroundings. The uranium mining is not a response to the lack of job opportunities in Pécs and its neighborhoods moreover it can deepen the economic prosperity.

The following organizations have joined our petititon:

Eszter Mátyás, Energiaklub    Contact the author of the petition

By signing, I authorize Eszter Mátyás, Energiaklub to hand over the information I provide on this form to those who have power on this issue.